A Long Time Ago…

Ok, it wasn’t that long ago, it was just 1979 and for my 6th birthday party I got a bunch of Star Wars Action Figures, some Yoda Underoos, and my man Bossk here. ( Which I still have to this day in my office thanks to my mom keeping all my stuff for me!) Apparently I also received a record called Duck Wars, which I haven’t found on iTunes yet and in the background you can see my flippin sweet Millennium Falcon Pinata which my parents made for me.

Some people would look at a picture like this of a figure mint in it’s package and say “oh I bet you wish you didn’t open that figure, because it’s worth so much today.” And my response is, are you stupid? Look at my face! I tore into every package and I played with those figures till their paint came off! The wonder years of imagination and fun that came from ripping the packages open and beginning to act out every seen in the movie and making your own is worth more than any amount of money!

Some of you might be asking WHY?? why do you care so much about a stupid movie and keep a stupid figure for over 30 years!?When I was a kid, I didn’t just watch Star Wars, I became the hero. My imagination would kick in me into hyperspace and my friends and I were immersed in the world of Star Wars for hours and hours. The same reason people love M-I-C-K-E-Y M-O-U-S-E! 04/25/2015

I had the great privilege of growing up in Tampa, FL just a few hours from Walt Disney World Resort and experiencing the “Magic” at a young age.  As I would visit WDW Magic Kingdom I had that same experience of being transported into imaginary worlds by going on rides like Peter Pan and Pirates of The Caribbean. They transported me to a place where imagination was now a reality and where I felt like the hero of each story.

Disney Resorts are a “visit into a world of wondrous ideas, signifying mans achievement. A Step into the Future with predictions of constructive things to come”

“There should be a place where parents and children can have fun together.”

Walt Disney, Dreaming of his own theme park before he built Disneyland

“Any good storyteller knows they have to watch their audience and reactions and always upgrade that story every time you tell it… We do that with technology, architecture, special effects, show effects.”

In the creative process employed by Walt Disney Imagineering, every themed experience begins with a story…it is built into the Walt Disney Company’s creative DNA.

Adam Berger, Former Walt Disney Imagineer, Author of Every Guest is a Hero

“It’s not the magic that makes it work; it’s the way we work that makes it magic. Everyone who works at Walt Disney World Resort learns that principle, and the result has been magic for the Guest.”

“We know from experience that even seemingly frivolous (Dreams), blue-sky notions can lead to realistic, yet innovative, outcomes.”

The thing that excites me most about this movie is WHO is producing it – Disney. As a grown up (on the outside) having built my own marketing firm it has led me to read and study every great leadership book and business books I can get my hands on to continue to grow.  Books like The Disney Way

, and Be Our Guest

all tell the story of Disney’s level of excellence and integrity that you don’t get anywhere else in this galaxy. Disney’s attention to detail and their ability to providing a storytelling experience that immerse the “Guest” in that story with sight, sounds, touch, and even smells around WDW.  Because of Disney’s philosophy of business and commitment to customer experience that permeates into everything they do, that is going to bring a level of excellence we haven’t experienced since… A long time ago, far far away.

If You Think Disney Should Hire Me To Help Bring This Park From Dream to Reality, Introduce me to an Imagineer !! :)

Which leads us to the next chapter in the Disney Star Wars Story:

When Walt Disney set out to build WDW Resort , he had his eyes on the future. To Make Dreams Come True like only Disney Magic can.

The Walt Disney World Resort is made up of 47 square miles of land…. or about 30,000 acres. Only about 1100 acres of that land is devoted to the 4 theme parks. In fact, with only 7,100 acres developed, there’s quite a lot of room for expansion! This is the easy option to start from scratch. 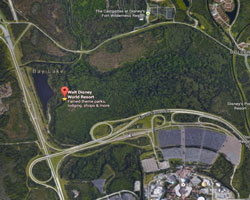 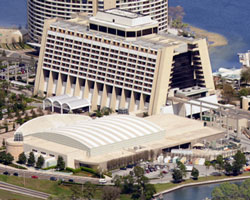 I'm Just Kidding, But seriously walt had Death Star on his mind when he designed Epcot! 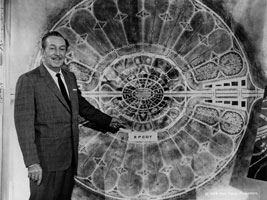 IF YOU THINK DISNEY SHOULD BRING THIS DISNEY STAR WARS RESORT FROM DREAM TO REALITY, INTRODUCE ME TO SOMEONE AT DISNEY TO HIRE ME :)

Disney Imagineer
“Imagineering” combines imagination with engineering. Building upon the legacy of Walt Disney, Imagineers bring art and science together to turn fantasy into reality and dreams into magic.

Why The Contemporary Makes Sense…

Now for some philosophical reasons for the contemporary resort being a good place for the new home of a Disney Star Wars Themed Resort. (And no it has nothing to do with the force or midichlorians!) I’m talking about Disney’s core philosophy of having unity and purpose behind every detail of imagineering the total Disney experience.
Kent Mitchell (General Manager Disney’s World Contemporary Resort) shared a great story about the contemporary being modern back in 1971 when it opened and the evolution of the hotel over the years. “Everything Disney imagineers did when it opened blew people’s minds!”
But the contemporary is lacking in that synergy of Walt’s look to the future today.  I visited the contemporary a few weeks ago and I couldn’t help notice there is no clear theme or on the inside.

Wing T Choa (former Imagineer Executive)  said “The resort plans are to tell a story of where people like to go on vacation and Disney is able to bring those place to the guest.” So If:

If the theme of the Contemporary Resort is to be, well contemporary or modern or even futuristic, it needs some help. Disney is all about storytelling and guest experience but there is nothing that says tomorrowland or the future to be found (other than monorail).

Help Us Obi Walt... You're Our Only Hope

“If Disney embraces the Star Wars brand like their own characters, tell the story and immerse guest into the Star Wars Universe like only Disney can, guest will be Amazed!” 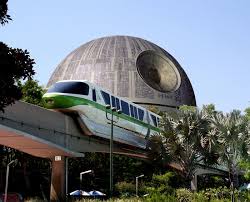 One of my favorite memories as a teenager visiting Epcot was the section they had under the , I mean Spaceship Earth that had all these amazing gadgets from the future. A phone I could carry around?? Shut up, that will never really happen! Then in 2-3 years I would see the technology of tomorrow come to life around me and I remembered where I saw it first.  That is the experience of tomorrowland and the entire section of the park that has Space Mountain and the Sky Rockets.  It is a perfect fit for the Star Wars brand to keep consistency with the theme Walt intended. (While I’m at it, you can probably take out the Tomorrowland Speedway and replace with speeder bike roller coaster or some green friendly electric landspeeders:)

If Disney embraces the Star Wars Brand like their own characters, tell the story and immerse guest into the Star Wars universe like only Disney can, guest will be Amazed! Then Disney will be able to create a place “where people like to go on vacation and Disney is able to bring those place to the guest.” I can’t go to a naboo hotel underground, or frozen hoth hotel or spend the night in Darth Vader’s chamber on the Death Star or Yoda’s hut or any of the other fun amazing places because it doesn’t exist… yet!

The new wave of hotels Disney is creating is amazing! The Cars, Lion King Animation hotel goes over the top, so why not give the Star Wars brand the same treatment? My daughter LOVED the lion king when she was young, but now that she’s a freshman in college, not so much.  I loved Star Wars when I was 6, and I have been a fan for 30+ years and there are millions of fans around the world who would flock to Disney just to experience what only Disney can deliver.  The Star Wars fan base is far more reaching than any other Disney movie and their fans are life long fan$ and even if we grow up (on the outside) our affection for Star Wars would draw us to a Disney Star Wars Resort like moths to a light saber.

Kevin Myers, a 42-year Disney veteran who is the vice president in charge of hotel operations, talks about how the contemporary resort is “iconic and guest are stunned by the futuristic idea of a monorail running through the hotel.” The Contemporary Resort has always been more of a spaceport than anything I have ever seen and more primed for the Star Wars Themed Resort than anything out there.

Walt Disney World became the first Destination Resort in America and what better way to celebrate their new purchase than by creating an amazing, futuristic resort that fit the theme of Tomorrowland and the Star Wars Universe.

Now that Disney owns Star Wars, it’s time that Star Wars fans had a proper place to go, play and stay to celebrate the fun that Disney could bring by being transported to a galaxy now, thanks to Disney not so Far Far Away…

What are your ideas?

According to, Bob Chapek, Chairman of Walt Disney Parks & Resorts, just confirmed that a Star Wars-inspired resort will debut as part of the new Disney 360 vacation concept.this revolutionary new vacation experience will be a living adventure that allows guests to immerse themselves in an entirely new form of Disney storytelling. 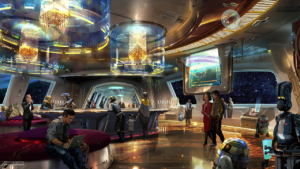 “It’s unlike anything that exists today.” Bob said. “From the second you arrive, you will become a part of a Star Wars story! You’ll immediately become a citizen of the galaxy and experience all that entails, including dressing up in the proper attire. Once you leave Earth, you will discover a starship alive with characters, stories, and adventures that unfold all around you. It is 100% immersive, and the story will touch every single minute of your day, and it will culminate in a unique journey for every person who visits.”

“Star Wars: Galactic Starcruiser will begin transporting you from Walt Disney World Resort in Florida to a galaxy far, far away beginning in 2021, Walt Disney Imagineering announced tonight. This is a new type of immersive vacation that only Disney could create – a two-night, cruise-style itinerary where you’ll become the hero of your own adventure in an experience that surrounds you 24/7 in Star Wars storytelling.”

Help Make This Happen…Share Across The Galaxy

If You Think Disney Should Hire Me To Help Bring This Park From Dream to Reality, Introduce me to an Imagineer !! :)

7 Things Snow White Can Teach You About Your Business

A Hero’s Journey to Becoming a Disney Imagineer